At Unlimited Net Worth, I aim high and am serious about growing wealth.  Rather than simply aiming to become a millionaire, my ultimate goal is to become a billionaire in United States dollars (it would be cheating to use some other high inflation currencies, like the Zimbabwe dollar, where you can obtain a $100 billion note easily).  Why aim so high?  In high cost cities like New York or San Francisco, one million simply doesn’t go as far as it used to.

There are currently only 1,645 billionaires on the 2014 Forbes list with a staggering combined wealth of $6.4 trillion.  Approximately 66% of the list was self-made, 13% achieved their wealth through inheritance, and 21% through a mixture of the two.  The odds of being on the list are infinitesimal at 0.0000002%.

Through persistence, dedication, and lots and lots of time, it’s definitely within reason.  Of course, the quickest path to finding a spot on the list is to found a company and to achieve a large payday with an initial public offering.  Alternatively, if you have a relative with billions stashed away, you might be in luck with a large inheritance, although you should probably visit again and send a card to stay in their good graces.  Unfortunately, only very few companies ever reach an IPO and most people don’t have a rich relative.  You might think I’m crazy, but it’s still very doable.

Easy as 1-2-3
To become a billionaire, you’ll need a relatively high paying job.  Ideally, you’ll want to make at least $100,000 per year and to increase that amount each year through merit increases at work.  In fact, any job on the top 20 highest paying jobs will work. Even if you're earning below $100,000, if you're watching your expenses like a hawk and increasing your earnings each year, you can still make it. I work as a “computer and information systems manager” and I still think it’s within reason.
Next, you’re going to need to invest like crazy.  Start out by contributing $45,000 per year and grow this contribution by 5% each year.  This might seem extremely aggressive, but if you’re earning over $100,000 per year, this still gives you plenty of money to enjoy life.  The 5% growth in your contribution should come from raises at work.  Invest all of the money in low-cost index funds, like the Fidelity Spartan 500 Index.  Index funds that track the broader economy have historically returned 10% per year.  With inflation (which averages 3.38% per year), your true purchasing power increases 6.62% per year. 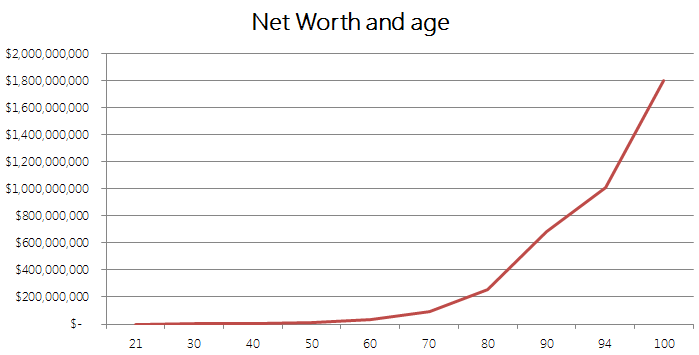 Let’s say for instance that you’re 21 and you have a net worth of $0.  If you contribute $45,000 in year 1, by year 2, you will start with $49,500.  The additional $4,500 comes from stock market growth.  By the time you’re 30, you would have close to $800,000, which is still very far away from one billion.  At this point, the stock market growth on your investments will likely exceed your contribution.  This disparity will only increase with time.

Although technically you’ll be a billionaire, in today’s dollars you’ll really only have about $89 million due to inflation.  Over time, the value of money goes down and a billion simply won’t be what a billion is today.  Nevertheless, you’ll still be part of an exclusive club of billionaires, but it’ll be slightly more crowded than it is today.  And seriously, you'll have far more money than you'll know what to do with.

By the time I’m 99, and hopefully I actually live that long, I will have over $1 billion USD.  Do you think that you'll become a billionaire?  Try our net worth growth calculator to find out.

Posted by Kevin Stratvert at 8:00 AM